Posted by John Brindle
Last year I went to Gamecamp. This year I went again. But this time, I ran my own session, delivering a twelve-minute speech on my ideas about 'quizzical play' to a bunch of people who were kind enough to come and listen. Here is a recording of that talk, as well as my notes, from which I read almost verbatim.

You can listen to the talk on Soundcloud here. You can also listen to the follow-up discussion here. Some parts of it basically summarise or replicates stuff I have already written about Dishonored and Art Game. Below is the full text of my notes, which I have tried to sprinkle through with links to the things I'm talking about. But it might be more fun to listen to the talk; I think so, anyway.

What is a mechanic? (my pragmatic view)

This is a little piece about the meaning of the word 'mechanic' which I fired off on Twitter the other day. It's about why talking about mechanics does not need to be rigid or robotic and about the uses and limits of the concept of a 'mechanic'. It's not perfect and probably incomplete but I've been asked to post it on the blog for easier citation and I hope it does a job.

It was prompted by a question from @criticalbrit (now @utterlyhorrid) and a response from @xenobotanist. The original can be found here.

How does it taste? The sexual politics of how Metal Gear Solid 3 treats Raiden 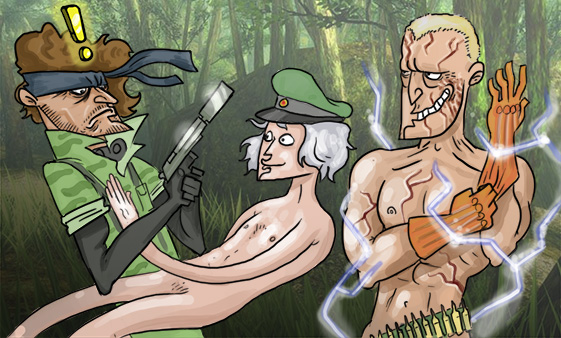 I like Raiden, okay? I’m a Raiden fan. I have all the merchandise - the action figures, the Skull Suit, the mask for casual and formal wear. So you can imagine my delight when Metal Gear Solid 3 allowed me to dress up as his spitting image – one Ivan Raidenovich Raikov. At first it seems like a bog-standard Metal Gear in-joke, but when it's considered alongside Raikov's relationship with bisexual electo-bastard Colonel Volgin, it suddenly crackles with a sexual charge. So is this a subversive twist on mainstream sexuality? Or just complicated homophobia?

'Quizzical Play' is a loose grouping of articles which explore what lies beyond the idea of winning and losing in videogames, and how players often subvert these ideas for themselves.

They say that inside every critic is a failed artist. It's true; he was delicious. But even I found it hard to resist when Pippin Barr's Art Game offered me a chance at virtual gallery stardom. Playing through it, I felt pride stirring within me, along with the urge to show off my artwork to everyone.  So what better way to analyse it than with a picture essay of my very own oeuvre?

Like so many of the games Barr makes, Art Game is set up like a joke. You pick your artist - a painter, a sculptor, or a performing duo - and try to conquer the art world with your works. The punchline is that you do so using the mechanics of classic games like Tetris, Spacewar and Snake. When you lose, your playthough so far becomes an artwork that you can title or simply trash. Soon a curator drops round and assesses your work for display in a gallery, sometimes often rejecting the best and ignorantly lauding the worst. It definitively answers Sophie Houlden's seminal question: can art be games?

Relax, don't do it: pulling the trigger in Spec Ops: The Line 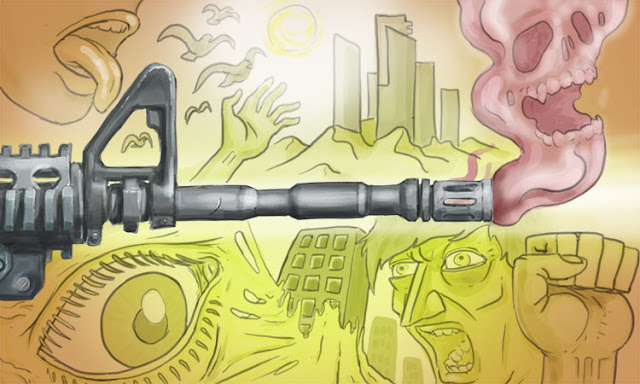 There is a line that people like us (i.e. games bloggers) have to cross. It is the line which divides people who like Spec Ops: The Line from people who don’t.

On one side, its lauding as a landmark subversion and the subject of Brendan Keogh’s groundbreaking close reading, Killing is Harmless. On the other, the mocking, the eye-rolling; its indictment by J. Shea as the cake-eating adventures of Captain Obvious, by Michael Clarkson as a “gutless and cowardly critique”, and by Darius Kazemi as “a middling shooter fumbling at meaning.”

The circles of hell: valence as character and Hitman's obscene moral calculus 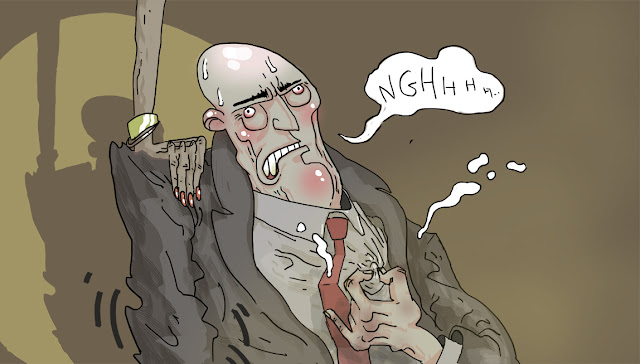 I wrote this post AGES ago and promptly forgot about it. I've just unearthed it in the guts of the blog system, and so decided to let it light, regardless of timing. Hope you enjoy it.

If you think your family reunions are bad – and believe me, mine are Shakespearian – spare a thought for Agent 47. Every few years he has to push his way to the buffet table through crowds of identical bald men distinguishable only by their barcodes, all disguised as each other and holding syringes behind their backs. Still, 47 is used to feeling anonymous because he was designed to be that way. He is deliberately without personality, a blank human being...as long as you pretend that ‘white’ and ‘male’ are blank attributes.

But what of his enemies?

This week [actually, months ago - ed] I wrote an article over at Gameranx about how the Hitman series handles character and morality. It's a reading of Contracts and Blood Money as "socially conservative treatises on sin and moral frailty" - which, by the by, an explains the origin of Absolution's infamous leather nuns. Here's a bit about BM's rehab clinic mission:


The situation is explicitly psychological: this is a place where people are imprisoned to protect themselves from their own destructive behaviour. The militarised boundaries and guarded checkpoints which make up the game’s bread and butter exist here as much to keep the inmates sober as to keep intruders out. But the system can’t protect your targets if they insist on subverting it. The mobsters seal their own fates with regular visits to secret booze caches, which, through careful observation, you can find and poison. It’s a clever setup because we already think about addiction in this way—both a crime and a sickness, a moral trespass and a fatal weakness. We are exploiting these men, but they also allow it to happen.

Interview: Jason Rohrer wants you to come home and find your family dead

Posted by John Brindle
...and in the game? (Honestly, he said it! It's at the bottom!)

Jason Rohrer was the final developer I interviewed for my New Statesman article. His forthcoming game, The Castle Doctrine, has become embroiled in the political storm over gun rights and self-defence. What fascinated me about it was that it simulated a little world with the specific intention of bringing about numerous armed robberies. After the Trayvon Martin, the Colorado theatre shooting, CeCe McDonald and Sandy Hook, it doesn't get much more political than that.

Jason Rohrer has a long indie pedigree. Five minute mortality simulator Passage did little for me but was played by many; Sleep Is Death allowed players to create stories for each other, while Chain World turns Minecraft into religious mythology. He's 35 years old and has been playing videogames almost his entire life. He became a programmer and studied Computer Science; these days he's able to make a full-time living from his games, and lives with his wife and three kids in Davis, California.

Pulling off the psychic kiss: A conversation with Richard Hofmeier

Posted by John Brindle
For my New Statesman article on political games, and following on from my interview with Merritt Kopas, I spoke to Richard Hofmeier about Cart Life, a "retail simulation for Windows." I had heard a lot about Cart Life and it had been gazing accusingly at me from the top of my 'must play' file for months, so I plunged in as quick as I could.

As it turned out, Hofmeier (@RichardHofmeier on Twitter) was a regular reader, and as interested in hearing my thoughts about the game as I was in hearing his. As such, this interview takes a slightly different form: it's more of a conversation. I abandon the normal journalistic practice of not blabbering on about your own half-formed ideas, and proceed to blabber on about my half-formed ideas. This is the full text of our conversation.
Read more »
1 comments

"It's a powerful thing to have people tell me how important this game is to them": Interview with Merritt Kopas

Posted by John Brindle
It's been too long since I wrote here, and I wanted my first post of 2013 to go off with a polemical bang. But now that we've given the holodeck a bruising, I'd like to post up some of the full interviews from my second piece for the New Statesman: political games.

For that article I wanted to really go beyond platitutes about games wot have politics in them and ask what it means to try and simulate a political situation - to impart an intellectual or emotional message about a system by building and pointedly contextualising a model of that system. One game that did this to interesting effect was Lim, by Merrit Kopas (@m_kopas on Twitter).