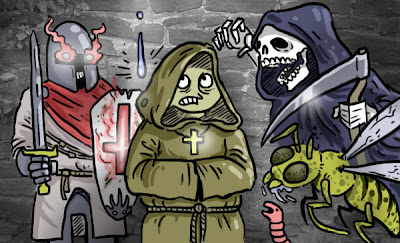 In a parallel universe, I start this article by declaring how sodding tired I am of games about the 13th-century Catharite heresy and its persecution by the Catholic Church. Sadly, in this world, there is only L’Abbaye Des Morts. Dealing with a dark and obscure annex of European history, creator Locomalito opts for the dark and obscure conventions of classic insta-death platformers like Manic Miner. But because of how it uses these conventions, it is – delightfully – not just a game about the Cathars, but a Catharite game.
Much of what we know about the Catharites or Albigenses is twisted through the lens of the Catholic mainstream and its political allies in the north of France, who waged and ultimately won a twenty-year crusade against the southern heretics and the local nobles who protected them. But the most common view of them is that found in the otherwise dubious Holy Blood, Holy Grail, which inspired The Da Vinci Code (and which used to be copied wholesale on Wikipedia). According to this view, the Cathars radically extended the Manichean undercurrent always present in Christian religion, dividing the cosmos into the domains of morally opposite but equally powerful forces. For the bonne hommes, as they called themselves, the god of Good was “entirely discarnate, a being or principle of pure spirit, unsullied by the taint of matter” – and all material things were the work of an evil demiurge who had trapped the divine and perfect spirits of mankind in a prison called the world.
Creation itself, then, was “intrinsically evil”, and its creator a “usurper God”, Rex Mundi, the King of the World. This ascetic zeal might seem fair for a religion whose holy book refers at one point to our “vile bodies”. But it was deeply problematic for the Catholic doctrine that Christ was simultaneously human (material) and fully divine, as well as for its attitude to Creation in general, on behalf of which he had died. It also had political implications: Cathars would not take oaths, nor marriage vows, and held procreation a sin. These were three things that strengthened the chains binding pure spirits to the polluted earth, but also things on which medieval society also relied for structure. Moreover it’s said that they had no objection to contraception, euthanasia or suicide. You can see why they all got killed. For their part, the Cathar 'perfecti', or nominal priesthood, caused plenty of trouble for the Catholics. Highlighting the excesses of the opulent Church, and the obvious gulf between their words and their deeds, was a good way of converting people to the cause, and for them, the wealthy, opulent Catholic Church must have seemed the very gilded centre of Rex Mundi’s rule on earth. For a colourful account of the movement, whose accuracy I cannot vouch for, see here.
As it happens, Cathars were also subject to a variety of slurs, from the charge that they underwent ritual starvation to transcend the flesh and thus committed suicide, to Alan of Lille’s bizarre (and at the time unoriginal) accusation that they worshipped by gathering in dark rooms to fumble for and eventually kiss the arse of a black cat. Catharism is also the source of the word ‘to bugger’, via its occasional designation by the contemporary mainstream as “the Bulgarian heresy”.
666 different kinds of buggered is exactly what you get in L’Abbaye Des Morts. You are trapped in a toxic material world. I’m not talking about a Britney/Madonna mashup. Everywhere there are beasts - spiders, snakes, zombies, giant flies with chattering skull-faces, and all manner of creepy-crawlies – all of which are totally deadly to you (as traditional, they kill with a touch).  The deadly toxicity of the material is a constant consideration; even seemingly innocuous drops of water can kill you, something I found out the hard way. As Buddha tells disciples in the Fire Sermon: all things are on fire. You move through a ruined world where everything hurts, and matter is damnation. Touch it, and you turn into a little red flame, and then a skull, and then nothing. 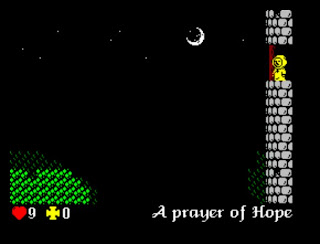 The aesthetics heavily reinforce this Catharite slant. Take the music: squelchy, grungy sounds growl from your speakers like a horror movie soundtrack filtered through a bed of slime. The colour palette is dark and lurid: night black, sick purple. Spiders and snakes come in acid green and turd brown, while barrels and rooftops are the colour of dried blood.  There is something abject about the way Jean Raymond (for you are he) crawls on the ground like a worm to avoid the material dangers when you hold the down key. In one section, ‘A Prayer of Hope’, you are trapped behind a wall in a corner of the screen, irrevocably divided by a physical barrier from the ethereal purity of the moon, standing in here for the Cathars’ God of Love, or something like it.
And then of course there are the omnipresent skulls. They appear in the walls as both decoration and simple brick, on enemies repeatedly, and in your death animation. To die, of course, is the ultimate materiality, because you turn into a thing. In L’Abbaye Des Morts, skulls, just as they were in medieval and Renaissance art, are reminders of this fate, recognisable as once belonging to something alive but always associated with material that is either enclosing (the walls) or lethal (the zombie crusaders). They embody the equation of death with the material world that Damien Hirst exploits and staggeringly subverts with his diamond skull  (honestly, it doesn’t work unless you see it with your own eyes – it’s free, unlike the rest of the exhibition, which is also worth seeing). The hanged brothers behind the Abbey’s hidden door confirm the connection. Death-touch hazards to the player just like any snake or bat, they have reverted to sinful matter, and become, like all the rest, a danger to those still in possession of their souls. 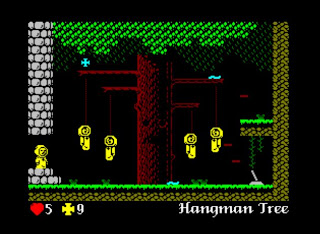 It is indeed your soul which allows your survival. You are the single element of agency in an automatic world. From the relentless zeal of the Crusaders, who move inexorably rightwards in a straight line through the animals that buzz left to right or ceiling to floor to the rain-drops that fatten and drip from the ceiling, your hazards repeat like clockwork. Much of the gameplay involves moving through the trajectories of different enemies all moving at separate speeds or in different directions and timing your runs for moments when they happen to line up. With no weapons, and only very slow movement, your only advantage is your agency, your ability to wait, rush, stop, go, make decisions. This is particularly clear with the grinning blue demon in the 'Cave of Illusions’, which always moves towards you in the closest possible approximation of a straight line, and which can therefore be tricked, lured under ledges and trapped there while you hop up above its head. In essence, the game embodies its own theology. Only your god-given powers of reason, the divine spark inside you, can help you thread a treacherous course through the awful physical world. 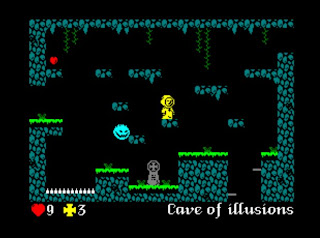 Of course, it is not alone in this regard. Locomalito (whose calling card is a pixel skull) pitches L’Abbye Des Morts as “an obsolete videogame for a dark passage of history” and says it was inspired by Manic Miner and Jet Set Willy. These games, too, see you shuffling between numerous hazards which move in predictable ways. Miner’s packaging boasts of its “Spiders, Slime, and Manic Mining Robots”, dangers to whose potency I can testify with the admission that I have all but completed L’Abbaye and failed to get past Miner’s first screen. Miner acknowledged its Satanic nature by using Edvard Grieg’s infernal march In the Hall of the Mountain King for a soundtrack. And from the Hammer Joes of Mega Man 3 to the perfect sine waves of Castlevania’s medusa heads, the classic platformer has this streak of Catharism which L’Abbaye Des Morts simply heightens. The pilgrim who would reach the paradise at the far right of the screen must jump many tribulations.

No wonder Locomalito describes his game as looking “old and somewhat horrifying”. These games come off like some ancient theology. The question they prompt is, "what sick, twisted bastard created this place?" But their activities are also those fundamental to human interactions with videogame systems: watching for patterns, exploiting their automatism, getting around them with the playful and unpredictable consciousness that only a human can offer. And the figure of the demiurge, the evil creator who builds a reality specifically designed to kill or entrap you for as long as your divine spark temporarily inhabits its world, will be familiar to players.
You know something’s a deeply entrenched platform convention if it’s subverted in Braid. There, too, you evade and outwit the slings and arrows of an automatic world by using your free will (and bending time, but who’s counting). Once you finally navigate back to World 1, however, which runs in reverse, and where it all began, you find your voluntary actions thrown back in your face. The very exercise of your agency (and your time-bending, for that matter) twists to establish consequences which are already irrevocable and which reframe the entire game in retrospect. As it turns out, those consequences constitute the world you navigate: the surreal, psychological possibility-space of a mind trying to find a way out of the trap its own decisions have created. L’Abbaye Des Morts, which ends with you ascending to heaven, gives agency a privileged position, like the medieval cosmos which put Man above Beast. Tim, by contrast, makes his own maze as he goes, using the very reason with which he tries to escape.
The Cathars’ beliefs were confirmed to them when the law which they had always believed was sinful started to come down on their head, and everywhere they turned it proved the point that any law ultimately boils down to the damned materiality of a sword-point. L’Abbaye Des Morts is a blackly comic excavation of a forgotten genre that unearths rich parallels with a forgotten religion. Plus a lot of old skulls. 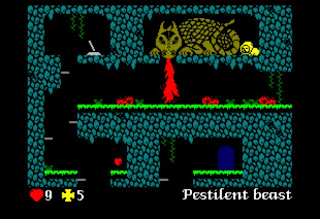